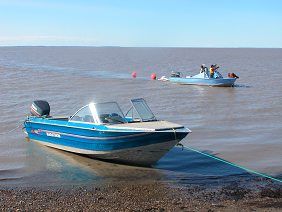 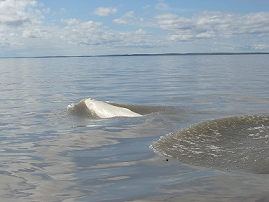 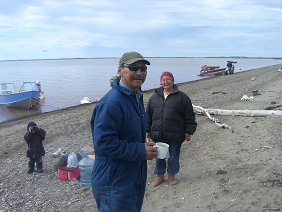 Beluga whales are known to aggregate in estuaries during summer, although the reasons for this behaviour are unclear and appear to vary among populations and estuaries. Possible reasons for beluga concentrating in estuaries include feeding, socializing, thermal advantage for calves, moulting, and avoidance of predators such as killer whales.

Beluga enter the Mackenzie Estuary in late June, when the fast ice bridge breaches, allowing them access. They form huge aggregations in the Estuary, often displaying social behaviours such as spyhopping, tail lobbing and breaching. Calves are seen during estuary surveys even though they are much harder to spot in the muddy waters. Abundance in the estuary peaks in early-mid July, after which the numbers decrease. Belugas are seen moving between the estuary and the offshore and between the bays of the Estuary during July in a "beluga conveyor belt". While the length of stay in the Estuary ranges from one to 27 days, the average is four days.

One way to protect the habitats of beluga in the Mackenzie Estuary is to identify the specific areas mostly heavily used within the Estuary and then determine how these bays differ from adjacent less well-used areas. Aerial transects have been flown over the four bays of the Estuary since the mid 1970s. Survey efforts varied from year to year, depending on weather conditions, priorities for that year's surveys and available funding. Data from seven summers of aerial surveys (within the period 1977-1992) were analyzed to understand patterns of beluga use.

Of the four bays, Shallow Bay had the highest beluga sighting rates; its rate was three times that of Kugmallit Bay and West Mackenzie Bay and four times that of East Mackenzie Bay (range was 0.25 to 1.0 belugas per km of transect flown). Shallow Bay also had the highest sighting rate of calves, three times greater than East Mackenzie Bay and 50 per cent greater than Kugmallit Bay. The distribution of surfaced beluga was clustered in each of the time periods in July that were examined and in all four bays. 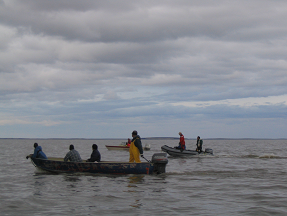 The analyses revealed seven specific geographic areas within the Estuary where beluga were regularly and recurrently concentrated, which we have called "hot spots". For centuries beluga harvesters have hunted for whales in the Mackenzie River Estuary. The areas highlighted by the aerial survey data correspond to the areas described by the hunters as good places to find whales. Why some areas of the Estuary are more attractive to beluga than others, year after year, is the subject of further study. Testing for substrate, water depth, temperature, salinity, and acoustic properities needs to be undertaken and results compared between "hot spots" and other areas. Obtaining a better understanding of such habitats, and the ways in which beluga use them, and why, would help government, industry and harvesters alike to protect and maintain the beluga stock and habitat.